An Ultimate Guide to
Kailash Inner and Outer Kora

The unbelievable and the ultimate journey to the ‘Centre of Universe’ i.e. Mount Kailash has always been counted amongst the most passionately followed divine walks. No pilgrim goes back empty handed on concluding the trek to Mount Kailash- such is the miraculous aura of Kailash Parvat. The devotees who are intending to be a part of the Kailash Yatra have to get ready for the treacherous Mount Kailash Kora (circumambulation) that means trekking around this peak’s base. A deeply numinous hub for the pilgrims of every religion, whether a Hindu, Jain, Bon or Buddhist- Mount Kailash is a true Nirvana attainment spot for thousands every year.

The heavenly Mount Kailash Kora is basically divided into two distinct Koras- Inner Kora and Outer Kora which stand out to be quite different from each other on the basis of their difficulty level, incorporation of spiritual hubs, distance and the regions covered. The decision on which Kora should be undertaken totally depends upon the preferences of the pilgrims planning to throng to Mount Kailash.

Here we are going to discuss the Inner Kora of Mount Kailash in detail. Have a glance:

As assumed, it has been considered that the four different (Hinduism, Jainism, religions which are known to be ardently following Mount Kailash are accompanied with distinct perspectives for the Kailash Inner Kora Yatra. People belonging to Hinduism see Mount Kailash as the heavenly abode of Lord Shiva and his eternal love Parvati. Bon witness it as the home of Damchauk and they observe the nine story Swastika. On the other hand, Buddhists entail that it is the residence of Lord Buddha as well as Manipadam and the Jains pay homage to Mount Kailash since, according to them it is a hub of Nirvana attainment for their first Tirthankara.

The pilgrims need to cover an approximate Kailash Inner Kora distance of 34 kms. The Inner Kora involves the usage of some mountaineering skills and equipment because it is one of the hardest Inner Kora journeys to Mount Kailash. While experiencing Mount Kailash Inner Kora, the participants are surely going to witness the scenic landscape made up of crevices, ice and snow leading to the formation of very beautiful surroundings.

Just in case you are planning to participate in the divine Kailash Inner Kora 2019, then you shall be quite aware about the Kailash Inner Parikrama route.

Here is the Kailash Inner Kora map to help you out in this case: 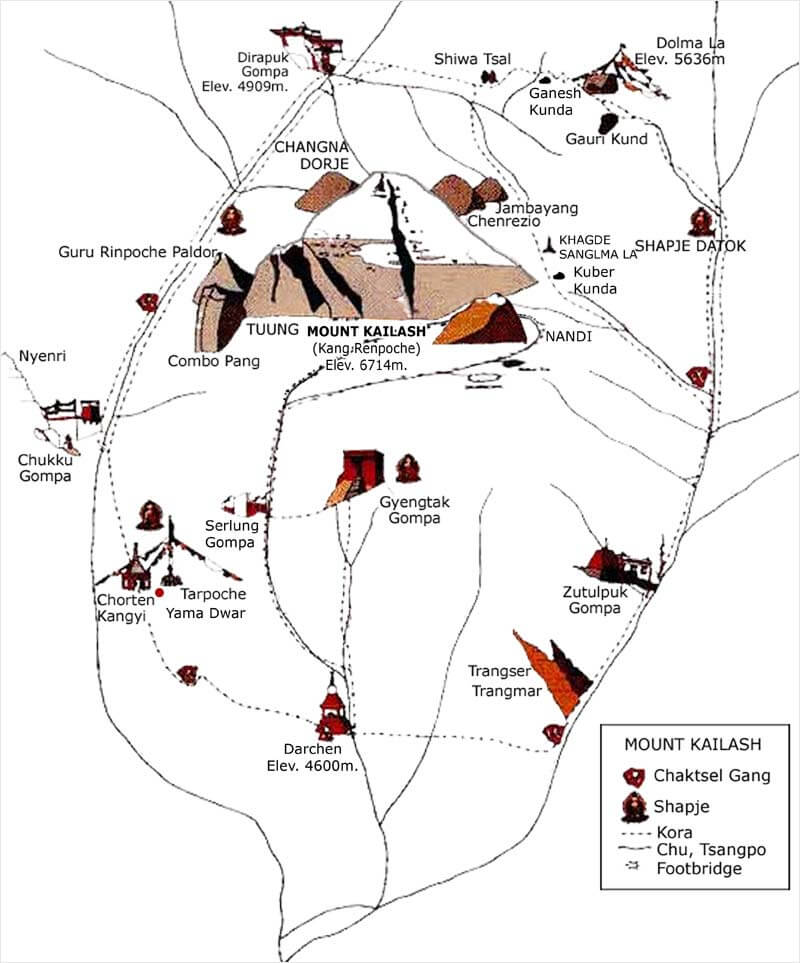 Divine spots during the Inner Kora
Devotees will have to extend their journey by three days in order to experience the Inner Kora. During this circumambulation, they are going to pay homage to innumerable spiritual destinations spotted in between the journey and these are listed below. Have a look to know more:

- Nandi Parvat
Situated quite near to Mount Kailash is the highly acknowledged Nandi Parvat and it is named so because of its shape as well as the appearance that really resembles Nandi Bull (the sacred vehicle of Lord Shiva). It is commonly said that Lord Shiva is deeply engrossed in meditation and thus, can’t listen to the prayers of the devotees. Thus, the Nandi acts as a messenger and passes on their wishes to Lord Shiva.

- Saptrishi Caves
The majorly prominent Saptrishi Caves are known to be the naturally formed caves consisting of 13 Chortens and as the name suggests ‘Sapt’ meaning seven and ‘Rishi’ meaning sage, it was once a home of the seven sages who were an ardent follower of Lord Shiva. These caves are located at an elevation of 6,000 metres and from here you can have a view of the Nandi Parvat.

- Ashtapad
One of the most important spiritual hubs lying in the Inner Kora of Mount Kailash, Ashtapad is a true delight for the devotees during the Kailash Yatra. The name Ashtapad hails from ‘Asht’ meaning eight and ‘pad’ meaning steps. It is assumed that one can ascend this mountain in eight giant steps that might lead to the attainment of Nirvana. This place is a hub of mysteries, lying unsolved till now!

- Atmalingam
It is said that the formation of Atma Lingam takes place from pushpadanta that is a snow coming out from Kailash’s tip. Not only this, but it is also uttered that Atmalingam is the origin point of Sailodha river’s holy and pristine water. You are truly going to spot the holy Atmalingam while being intrigued in the Kailash Inner Kora Yatra.

- Kuber Kund
Kuber Kund is the most important lake spotted during the Inner Kora of Mount Kailash. It is highly revered due to a plethora of mighty tales associated with it. However, the scenic surroundings here and the serenity around this lake shall undoubtedly leave you awestruck.

The Inner Kora is considered to be a quite tough trek, however the results on completing it are truly fruitful. The sense of satisfaction, peace of mind attained during the whole journey of Kailash’s Inner Kora and the divinity lying in the spiritual hubs spotted in between- each and every aspect is magical!